A Year that Asks 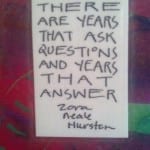 I’ve had this quote on my refrigerator for many years. The author wrote one of my favorite books.

This year asked A LOT of questions.  It is a year that I’m glad is over. It was cloudy and wet with rain & with tears. There were tough decisions and injustices. It was humbling, and uplifting at the same time.

We have enjoyed a good climate for practicing midwifery in South Carolina for many years but this year a confused person decided to try and limit midwifery practices and even require us to wear name tags that identified us as “lay midwives.” In March, a bill was introduced in the legislature that we worked hard to kill. We were successful! We asked “Why are midwives STILL persecuted in America?”

After a weekend in April when I had 5 births in 2 days I asked myself “Did I give everyone the attention and support they needed? The answer is no. I learned to ask for more help.

In May I took my first real vacation in over 10 years and went to Europe for 2 weeks: Paris, France; Cinque Terra, Italy and Interlocken, Switzerland. I brushed up on my high school French and fulfilled a long-time wish to visit this continent. It was lovely and relaxing and fun and yummy (I ate a lot). Photos below.

While I was away I missed the births of a few mamas with whom I had provided prenatal care, including 2 whose previous births I had attended. But I jumped right back into the catcher’s seat and enjoyed more little beings coming into the world. In June I celebrated my 50th birthday with family and friends. But the difficult part of the year was yet to come.

In August our licensing agency decided to enforce a regulation that has always been on the books but that was never enforced before. We were told we must have a physician “on call and available to provide medical assistance at the birth center at all times it is serving the public.”  This regulation was not enforced before because it is unrealistic and unnecessary. If a mama needs medical assistance there is nothing a doctor can do at the birth center. She needs to be in a medical facility with medical equipment.  Calling a physician to come only delays the care she needs at a hospital. In fact, studies show that having a M.D. at a birth center does not improve outcomes.

Then, in September, a mother who labored at the birth center was transported to the hospital and her baby died.  This caused the licensing agency to issue an emergency suspension of the birth center’s license as well as the licenses of the 2 midwives who attended that birth. The reason given for suspending the BC license was that we did not have a physician on call and available to come to the birth center.

Subsequently, every birth center in South Carolina (there are 6) was told they had to comply with this regulation or they too would be closed. We came together to reason with the regulators but they refused to talk or listen to us, or to other experts, or to the evidence based studies. It wasn’t until there was public outcry from the mother’s themselves that they decided to talk. We have 6 months to comply with the regulation or to ask the General Assembly to change the law. We will do the latter.

Now we have more legislative work to do. We want only to focus on the mamas and babies who seek out the midwifery model of care, but, in order to provide that care, we have to fight for the right to give it. I ask why the either-or mentality? Why can’t midwives and doctors cooperate and collaborate for the betterment of birth practices? Midwives recognize the value of medical care when emergencies arise. Doctors must recognize the numerous benefits of midwifery care.

It took more than 3 months working with regulators to re-open the birth center. It was extremely frustrating and at several points I asked myself, “what other career do I want for myself?” Walmart greeter sounded nice. Or librarian. But then, another birth happens and I remember why I do this. I do it because it’s right, it’s what women want, it’s what brings babies gently and safely into the world.

The year had difficulties but they were interspersed with joyful births and happy celebrations—my milestone birthday as well as a milestone 20 years of being licensed to practice midwifery in SC.  Here are my statistics for 2013:

I attended over 68 births this year (I lost count of the births where I assisted another midwife). I was the primary midwife for 53 mamas. Of those 53:  15 had their first baby and 37 had a subsequent baby. One mama was a grand-multip having baby # 10!  5 of those mamas were transported to the hospital (3 during labor, 2 postpartum). 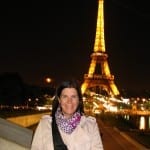 In Paris in May. A red moon was rising beside the Eiffel Tower 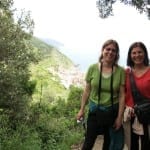 On a hiking trail in Cinque Terra, Italy. The village of Vernazza in the background. 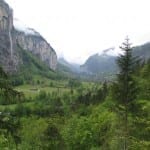 The Interlocken area of Switzerland. Waterfalls from the Alps.

Leave a Reply A Year that Asks Cancel reply