The city street just outside my neighborhood has been under construction for 2 years now. The street used to be a quiet two-lane road leading to the highway that leads to the interstate. This street was very hilly with tall peaks and low dips—there aren’t many roads like it in Charlotte. A friend told me they used to call it “roller-coaster-road.” My speedometer would definitely get away from me when I drove down those hills. Twice I was pulled over by cops on this road for speeding—once in the middle of the night, coming home from a birth, when I was ready to hit the hay and there were no other cars on the road. The policeman was waiting at the bottom of the last hill for someone just like me.

There are several neighborhoods that have entrances directly off the hilly part of this road and the sight distance when pulling in & out of those subdivisions was very short. So after several accidents and many years of meetings between homeowners and city officials, plans were made to not only widen this road but to actually raise the entire street in order to remove the hills and improve sight lines.

I drive up & down this street almost everyday and it’s been amazing to watch the construction. One side would be closed off for months at a time and traffic backed up while cars were funneled through one lane. It’s been muddy and messy and loud and ugly. We noticed a big increase in deer coming through our neighborhood after all the trees were taken down—a side effect I enjoyed even when they stopped to snack on my garden.

The road project was supposed to be finished at the end of 2014 but it’s still being worked on. A nice bridge has been added over the creek that was specifically built high enough for the deer to walk under so they are less likely to run across the road.

Similar construction has been happening at the Birth Center for the past 2 years with major developments this past year. 2013 had too many low points so in 2014 we’ve been raising standards, improving safety and building bridges. This started with receiving our national accreditation! The standards of the American Association of Birth Centers (AABC) are based on the latest scientific evidence and are ever evolving. Science changes constantly but humans are notoriously slow to change course. Enforcing obsolete, static regulations (as the state of SC continues to do) postpones progress and is potentially dangerous. So, newer, more fluid standards will improve birth outcomes in birth centers across the state and the country.

This year brought some barricades and lane changes as we were required to adhere to some of those old concrete regulations, the ones that are no longer scientifically relevant, but that are in place for now so we have to drive along that route until current standards are adopted opening up new avenues.

Bridge building is the most challenging and the most exciting phase moving forward. We have formed relationships with incredible doctors who are here to help us navigate some of the old regulations. We always learn from them and I feel they are learning from the midwives, too. When we learn from each other the connections are stronger and make the road safer for all mamas and babies.

That new bridge on my street has only one lane open right now but I can see where the new lane is about to be paved and connected. There are decorative lamp posts on each side but only one side has the actual lights in place. The other side is waiting for it’s bulbs and then, very soon, both sides will be open and lit. I look forward to the day when both sides are working together because that’s when everything is the strongest and the brightest.

In 2014 I was the primary midwife for 45 births. 28 of them occurred at the birth center and 17 were home births. Eleven were first time mamas and 34 were having subsequent babies (4 were grand-multips, 5+ babies). Eighteen of these babies were born in the water. One mama had the largest baby of any of my clients, ever: 11 lbs 3 oz! 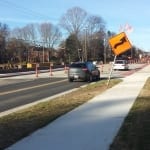