Summer in the Country

It’s the end of another year and it has been another great one filled with sweet babies. This summer I attended several homebirths that were a good drive out to the countryside. Three families whose previous births I attended when they lived in town moved further away from the bustle and adopted a homesteading lifestyle. Two of these families did not know each other before moving to their new homes which turned out to be right next to each other (with lots of land in between). They got to know each other when both mamas became pregnant and realized they both knew me. They were due to deliver within a few weeks of each other. One family was expecting baby #9 and the other #4.  During prenatal visits they shared stories with me about gardening and homeschooling and a run-away pregnant goat (she came back). The moms checked in on each other and when their due dates got close they kept an eye on each others driveways for my car. The mama with the goats delivered first, in the middle of the night, so the second mama missed my arrival and departure from her home, but soon heard the news. When the second mama went into labor she allowed me to tell her neighbor I was there so she could send her some happy birthing vibes. These 2 moms have very different lifestyles and interests and personalities, but pregnancy and birth always bonds people together. I snapped this photo of their driveways when I went back for a postpartum visit. 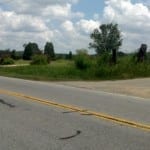 The third mama moved even further away from city life and was due within a few days of the mama with goats. Thankfully they didn’t go into labor at the same time because the driving distance between their homes was about an hour and a half. She had baby #7 in the middle of a different night. Driving through the countryside in the dark is disorienting because I can’t see the same landmarks and I always feel like it takes longer. Just when I think I surely must have missed a turn somewhere it comes into view and the home is lit up so I can find my way inside where it’s quiet with all the older children sleeping and mom and dad are whispering excitedly. Below is a photo of their pretty fence-lined driveway with bamboo growing on the other side. The oldest son cut pieces of it down for my apprentice and I with his machete. Living in the country teaches children valuable skills that city kids don’t learn–skills they will use to serve others when needed. 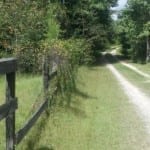 Leave a Reply Summer in the Country Cancel reply